The Jackpot Lithium property, located in the Georgia Lake Area about 140 km NNE of Thunder Bay, Ontario, is situated approximately 14 km by road from the TransCanada Highway (Hwy 11) and approximately 50 km from the town of Nipigon, on Lake Superior. The property contains two historical resources. The Main Jackpot Zone was reported to contain 2Mt @ 1.09 Li2O as estimated in 1956 by Ontario Lithium Company Limited*. The Vegan/Newkirk showing was reported to contain 750,000 tons grading 1.38% Li2O in 1956 by Vegan Lithium Mines Ltd. 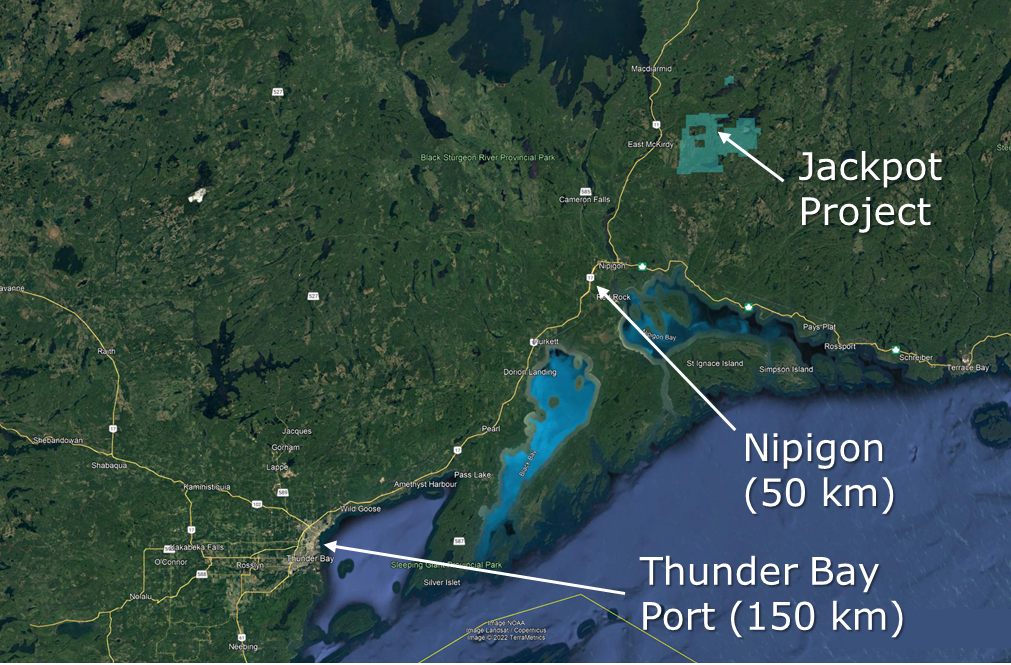 Lithium was first discovered near Georgia Lake in 1955 within granitic pegmatites. The current Jackpot property covers the Jackpot and Newkirk-Vegan lithium deposits, described in a 1965 report by E.G. Pye published by the Ontario Department of Mines.

The Jackpot deposit was tested by a total of 32 diamond drill holes (~3,246 m) in 1955 by Ontario Lithium Company Limited, an associated company of Conwest Exploration Co. Ltd. The drilling confirmed the presence of at least two spodumene-bearing granitic pegmatite bodies, one at the surface (Dike No. 1) and a second body (Dike No. 2) lying beneath Dike No. 1.

Dike No. 1 is a 6 to 9 meters thick, flat-lying body occurring as outcrops and further exposed by historic trenching. A review of Ontario government assessment files suggest minimal drilling was completed on Dike No. 1 as efforts appear to have been focused on the larger (Dike No. 2). The 1955 drill logs extracted from archived files indicate assaying from only one drilled section within Dike No. 1 even though spodumene is identified in several drill logs. Records from DDH 428 intersected 1.47% Li2O over 3.96 m from the surface. The Company has not yet verified the reported assays. Dike No.1 represents a readily accessible target for trenching and bulk sampling and acquire sufficient material for metallurgical testing.

The Newkirk-Vegan deposit was test in 1955-1956 by 74 diamond drill holes (4,262 m). Vegan No. 1 pegmatite dike has been traced in outcrops and in 19 diamond drill holes over a length of 213 m. It ranges from 1 to 9 metres in thickness and averages about 4.6 m. It strikes South 35-40 degrees and dips 35 degrees East. The dike consists of coarse-grained to vey coarse-grained elongated crystals of white potash feldspar and prismatic crystals of spodumene, 2-8 inches in length, in a groundmass of quartz, feldspar, and muscovite. At the south end of the dike, some red garnet and black tourmaline are also present. The Vegan No. 2 Dike averages 4.9 m and ranges up to 5.6 m in width, and is essentially a tabular body that dips 35-45 degrees NE. The deposit is similar to Dike No.1.

*All drill intercepts reported are historical in nature and are taken from assessment files available at the Ontario Ministry of Northern Development and Mines. The assay results have not been verified by Imagine Lithium. The estimates presented above are treated as historic information and have not been verified or relied upon for economic evaluation by the Company. These historical mineral resources do not refer to any category of sections 1.2 and 1.3 of the NI-43-101 Instrument such as mineral resources or mineral reserves as stated in the 2010 CIM Definition Standards on Mineral Resources and Mineral Reserves. The explanation lies in the inability by the Company to verify the data acquired by the various historical drilling campaigns. The Company has not done sufficient work yet to classify the historical estimates as current mineral resources or mineral reserves.

Approximately 90 kg of spodumene-bearing granitic pegmatite rocks were collected from the surface and sent for assaying. Five of seven samples returned significant lithium values with samples returning in excess of 2% Li2O. Significant results include the following: 0.85%, 2.08%, 1.02%, 2.01% and 2.82% Li2O (lithium oxide).

In 2018, the Company completed a diamond drilling program aimed at confirming and expanding on the historical drilling (1955) at the Jackpot Property. A total of 53 holes were drilled (9,496 metres) in its long-hole program and 8 drill holes (298 metres) in its short-hole program. The long-hole program was aimed at surface, near-surface, and deeper Main Zone Dike spodumene (lithium) bearing pegmatites, whereas the short-hole program was focused exclusively on delineating surface and near-surface spodumene-rich pegmatites.

In addition, during 2018, the Company completed a prospecting and grab sampling program (96 grab samples) over most of the Jackpot Main area, identifying six (6) new areas of evolved surface pegmatite dikes and extending the historically known central Jackpot dikes to the east (+500 metres) and to the west (+400 metres).

In 2021, the Company mobilized a ground crew to sample target areas on its Jackpot lithium project. The areas of interest were generated from a high-resolution geophysical survey completed on the Jackpot property. The survey, conducted by Novatem Airborne Geophysics, identified several east-west trending anomalies that reflect structures similar to the Jackpot lithium deposit.

The ground crew sampled spodumene bearing pegmatites more than 300 m north-east of the 2018 drilling area. The pegmatites were observed over a strike length of approximately 900 m and appear to continue under cover to the north-east and under a small lake to the south-west. The identified pegmatite dykes outside the known Jackpot historical deposit area appeared to have extensive strike length and represented excellent targets for follow up exploration. Imagine Lithium designed the 2022 drill program to test extensions of the Jackpot lithium deposit.

The 3,000-metre drilling program on the Jackpot Lithium Project expanded on drilling conducted in 2018, testing the eastern and western extensions of the dikes, as well as other zones of interest with lithium bearing showings in the area.

The first phase of the program expanded the mineralized lithium zone at least 400 metres to the east of the previously drilled area (see press release for further details). Highlights of the assay results include:

This program identified a 3 km trend of sub-parallel spodumene-bearing pegmatite dikes that extends to the east and west of the Jackpot main drilling area. The figure below outlines the approximately 18,800-hectare Jackpot Lithium property and trend. 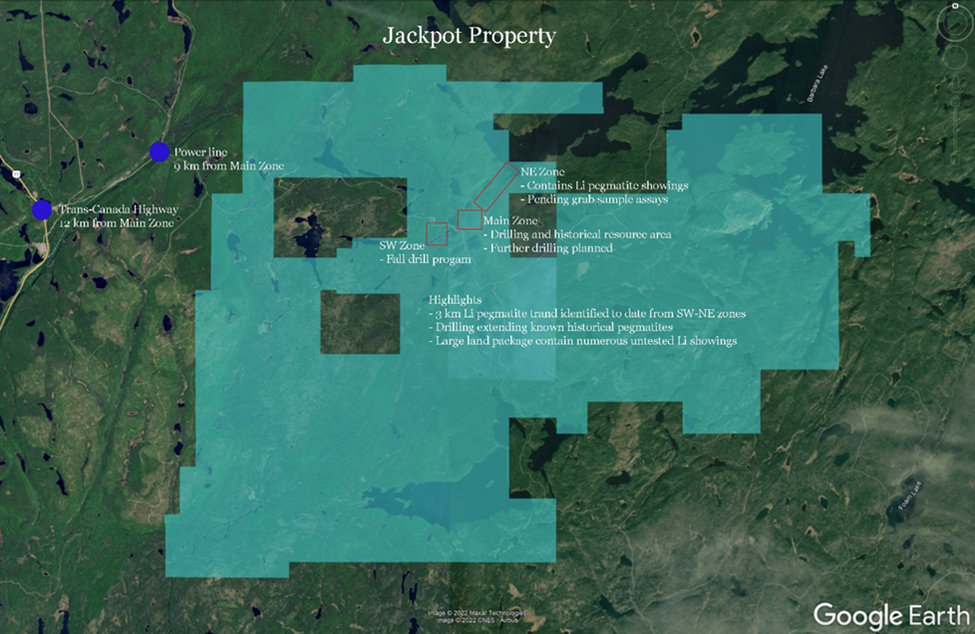 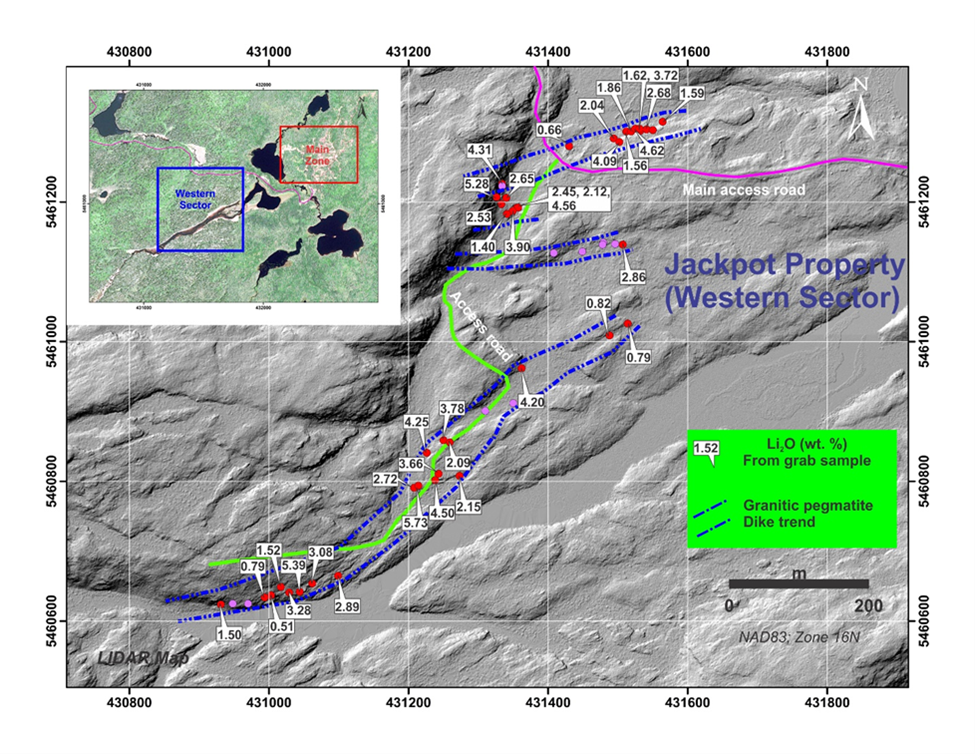 The figure below indicates the location of spodumene-bearing pegmatites that have been identified elsewhere on the property to date. 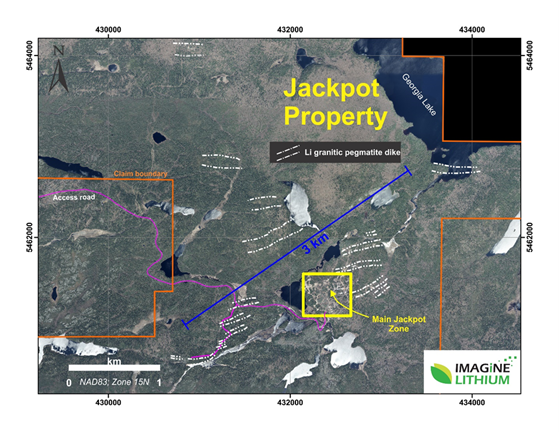